Last week agricultural experts from across Africa and Western countries gathered in Harare, Zimbabwe to design strategies for reducing food losses affecting African smallholder Agriculture.  The event was convened by the Food and Agriculture Organization of the United Nations (FAO).  Participants heard that Sub-Saharan Africa loses grain valued at US$4 billion annually, enough to feed 48 million people.   In fact, post-harvest food losses exceed the amount of food aid provided by development partners.  Adding to the startling statistics is the fact that 95% of research funding continue to be directed at agricultural production and a paltry 5% to post-harvest losses research. 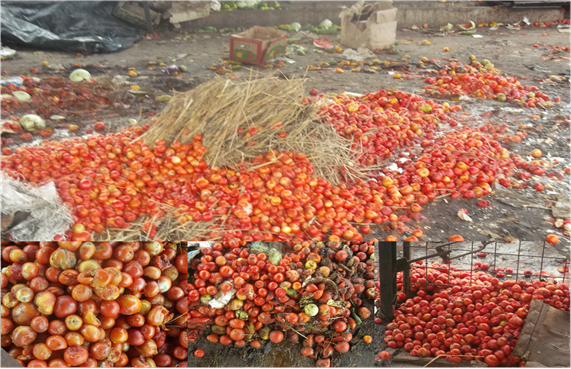 What do we mean by food loss?

While the Harare gathering did not dwell so much on definitional issues preferring to focus on trying to understand the magnitude of the problem, working with farmers and traders for many years has awakened eMKambo to various notions of food loss. The way farmers understand food loss is different from the way academics and practitioners do.  Nutritionists also bring another dimension of food loss which should be taken into account.  Post-harvest losses research has focused mostly on decrease in volumes and physical damage at the exclusion of nutritional losses – how much carbohydrates, proteins and vitamins are lost due to poor production practices, market failure and other reasons?

The majority of smallholder farmers embrace an ecosystems approach to food production such that what researchers think is loss may not be considered a loss by farmers. When a farmer grows maize s/he is either growing for household consumption, for the market and for livestock.  This is the basic ecosystem at farmer level.  If the farmer grows a hectare of maize, s/he can meet household needs first, then consider surplus for the market and some sub-standard produce goes to livestock.  Where exactly can you identify the loss? Household consumption is not a loss and so is feeding livestock.  Either you go all the way to analyse the value of the beast to which crops are fed and translate that to maize quantities that could have been harvested.  Given that smallholder farmers use manure, feeding livestock contributes to manure which also contributes positively to production.  Where a farmer was supposed to spend $30 buying a bag of fertilizer, s/he uses manure resulting from crop left-overs that were fed to cattle.  In this scenario, a farmer will be surprised if you talk about loss.

Loss from whose perspective?

If you look at a maize cob, it is impossible to incur 100% loss.  It’s a question of how other by-products are used.  If some by-products such as the outer skin or grain damaged by weevils are fed to chickens, you can’t say it’s a loss.  You have to track alternative uses to which a commodity is subjected before concluding that there has been a loss.  Smallholder farmers have a long history of environmental awareness which they take into account when assessing food losses. From an environmental point of view, when you feed nature like birds and insects, you are not incurring a loss, according to farmers.  Butterflies and bees which end up pollinating your crops feed on some of your commodities.

The only loss that is beyond the capacity of farmers and other actors is drought-related.  If post-harvest loss is recorded as 30%, where did that produce go? In the market, it is possible to say 30% loss resulted from gluts but this requires rigorous analysis. If from 60 bags of maize, two bags are lost to weevils, it is important to track where those two bags end up.  They may not be thrown into the bin because farmers are good at managing their resources.  Without thorough evidence, there is a danger of exaggerating post-harvest losses when the most significant losses may be at production level.

While a box of tomatoes can fetch $8 when the market is favourable, the price can go down to $1 or 50c when there is a glut.  This is often due to a mismatch between supply and demand and very poor quality product on the market.  Where a farmer doesn’t achieve $8/box because s/he did not use appropriate varieties, inputs and adequate skills, resulting in 50c or $1/box, s/he can’t say s/he has incurred a loss because s/he did not lose money in acquiring inputs.  The most painful loss of value is related to gluts in the market when the farmer has done everything correctly.  At the moment, every farmer wants to get $8/box of tomato even if they have not applied the same resources.  That is an unjustified profiteering mind-set.

There are much better options in averting losses at production level than when a commodity is already on the market.  The rural ecosystem is made up of wild birds, animals and poor households who can be given food before it gets bad.  This is how loss can be averted.  There is also a social and relationship-based benefit in giving food to neighbours. Comparatively, in urban markets physical losses are mainly caused by poor infrastructure, off-loading and over-handling as well as packaging which often destroys fragile commodities like tomatoes.  For instance at Mbare market in Harare, at least three 7-toner trucks of produce are taken out as waste daily due to these factors.  Such high losses are not found in rural areas because the ecosystem doesn’t allow food to be lost.

Perhaps where loss issues can be talked about is in horticulture.  After working on field crops, most smallholder farmers migrate to horticulture gardens which, besides being a source of nutrition, are also sources of income.  Losses from planting to marketing are high in horticulture particularly where farmers lack the right knowledge on choice of variety and management practices.  Some of the critical post-harvest questions include: How many farmers know how to appropriately harvest a tomato fruit? What is the timing and methods of removing the fruit from the plant?

There has not been significant research aimed at understanding appropriate packaging for horticulture commodities. For instance, what is the percentage loss caused by wooden boxes?  What percentage loss can be attributed to bad roads? What is the potential of baskets as containers of tomatoes?  What happens to tomatoes in terms of nutrition and quality when put in a wooden boxes or crates over a period of time?  What about if wooden boxes are stacked above each other?  This calls for research on how packaging contributes to both physical and nutritional losses. Another critical research issue is transportation. How appropriate are available trucks for transporting tomatoes and fruits?  How much does a 30 – 50km dusty road contribute to losses?  Uncovering this will strengthen arguments about the need for improving road infrastructure.

Who is driving post-harvest losses research?

Unfortunately, most of the research is driven by the needs of researchers as opposed to being farmer-driven. Such research satisfies the professional egos of researchers at the expense of addressing real farmer needs and policy priorities.  It’s more like a solution looking for a problem. Unless we build farmers’ capacity to deal with surplus commodities, researchers will continue bringing forward narrow research themes aimed at pleasing their peers instead of addressing pressing post-harvest issues. You can’t treat loss in isolation.  Is it physical losses, losses in quality which results in reduced value or loss in gluts which results in give-away prices?  To what extent do aflatoxins cause serious losses that would warrant a lot of attention more than other post-harvest issues?