For a very long time, each country has had what it considered a staple food for its citizens.  However, climate change, globalization and changes in consumption patterns are disrupting traditional staple foods. My word web describes staple food as a necessary commodity for which demand is constant. Rather than continue promoting a few staple commodities, countries are being forced to think in terms of broad nutritional food baskets. A major question is: How can developing countries tap into the resilience and flexibility of smallholder farmers, traders and informal markets to build nutritional security for the next generation? 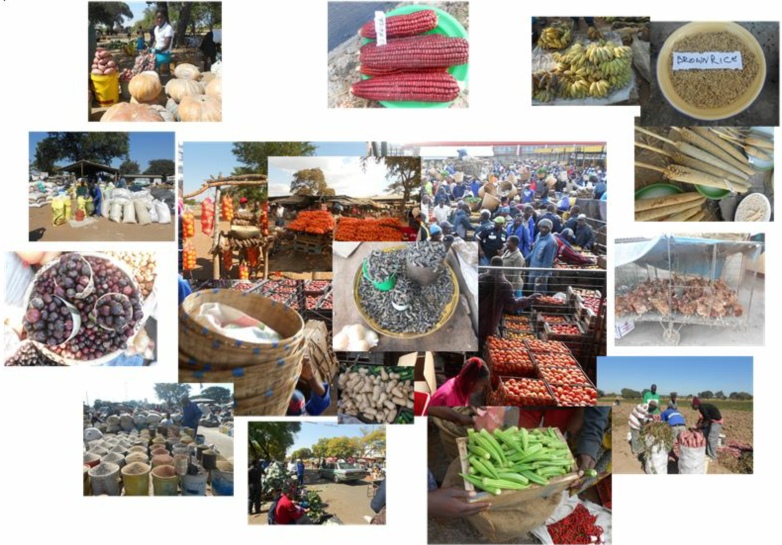 One of the most under-estimated virtues of African informal agriculture markets is their capacity to harness the convening power of urban centres to pull together food baskets from diverse farming areas. As each informal market breaks bulk it mixes and matches commodities according to diverse nutritional needs. For instance, in Zimbabwe, commodities travel in bulk from Mbare market in Harare to Malaleni in Bulawayo where the local market consolidates food baskets for local consumers. This mixing and matching role needs to be fully understood because it influences consumption patterns.

When the consumer budget is strained, some commodities are rejected. This is how commodities are given weight in terms of whether they are necessities or luxuries.  For instance, luxuries like carrots, peas and cauliflower can sometimes be forgone in preference for tomatoes and leafy vegetables.  A necessity is hardly substituted fully and that is why a tomato is always in the market because it is a necessity. For those that are considered necessities, when demand is high, prices tend to be high due to an intrinsic tendency by consumers to have an appetite for them. Lettuce, carrots, peas and fine beans are not produced in large quantities because they are sometimes considered luxuries not necessities.  Unfortunately, while these are highly perishable, most countries have not developed appropriate preservation methods for them, besides putting in the fridge (which in some cases affects taste).

In much of Southern Africa, food crops start flowing into informal food markets as from January all the way to July.  This period accommodates 90% of commodities and their varieties.  The diversity covers field crops, staple foods, cash crops, fish, eggs, varieties of meat, legumes and small grains.  After harvesting, around March and April or May, farmers re-allocate their time from field crops to horticulture, poultry and fish farming, among other critical socio-economic activities. They start producing tomatoes and all kinds of vegetables.  As the winter season comes to an end and water becomes low, farmers switch to commodities like carrots, peas and broccoli which do not occupy large spaces and use less water.

While seasonal changes influence the demand and supply of different commodities, winter tends to have the biggest variety of commodities which translate to better nutrition. Consumers consciously decide what they can eat in the cold season.  In winter Mondays, consumers take advantage of low prices to buy in bulk and avoid braving the winter cold going to the market.  However, during the hot season, they can buy in small batches because trips to the market may not be affected by the weather. When bulk buyers come to the market once a week, commodity prices tend to be reduced during the middle of the week.

Commodities like avocadoes, bananas and other fruits that are ripened on-farm or at the market ripen at a slower pace during the cold season and this affects the rate at which they enter the market.  It is said sugar in these commodities influence the speed of ripening because sugar hastens fermentation processes which also influence taste. The cold season is also characterized by a broader nutrition basket comprising tsanga midzi, garlic, mhiripiri, lemon, magaka, masawu, tsunga vegetable, a wide range of fruits, zviyo porridge and other foods that are traditionally believed to cushion people against cold. The supply of chickens and eggs tend to be low during winter because chickens do not eat or drink a lot during this period compared to other seasons. With increasing awareness, consumer choices are influenced by nutrition although income is another determinant.

Knowledge as a builder and conveyor of nutrition baskets

Farmers who bring commodities to informal markets make it a point to speak to consumers so that they fully understand market requirements. Sharing knowledge makes it possible for them to become aware where tomatoes are being produced in abundance so that they decide to change to other commodities rather than going back home to produce what other areas are producing better and in more volumes. That is how knowledge becomes a builder and conveyor of nutrition baskets. During winter, most smart farmers who participate in the market acquire knowledge which they use to plan for the next season’s winter production. They get to learn what type of commodity to grow and when?

Exchange of nutritional knowledge is also high during this period. Nutritional knowledge is associated with commodities and source areas. Each commodity has nutritional explanations from the areas where it is produced and used for subsistence. That knowledge is extended to the market and becomes a Unique Selling Proposition for particular commodities. On the other hand, the diversity of commodities on the market compels consumers to rationalize their budgets and pick commodities through nutritional lenses.  They try to ensure their budgets accommodate fruits, vegetables, tubers, field crops – building a complete nutrition basket. In most cases they do it unconsciously without knowing specific nutrition elements or vitamins in their choice of commodities.

The power of gathering evidence

Continuous evidence gathering is critical for identifying and updating nutrition basket drivers from various climatic regions. Such evidence should be built into models and investment plans towards national nutrition security reserves. Just as African countries build food reserves in the form of maize silos, they need to focus on building reserves of other nutritional components in order to balance the national nutrition equation. Continuous maize production and consumption exacerbates nutritional challenges. Up to date evidence can enable increasing the shelf life and consistency in the supply of nutritional commodities. Ultimately, it should be possible to build an all year round nutritional basket.

Financing should be tailored accordingly rather than congesting funding in a few commodities in ways that skew the national nutritional balance.  This big picture can only result from connecting the dots. To the extent that focus on value chains results in all support going to a few value chains, transformative agriculture can result from a unified nutritional basket framework approach. That way, financial institutions move from financing over-subscribed value chains like sugar beans, soya bean, tobacco, maize, cotton and sugar cane to funding elements of a nutritional basket based on gaps in the nutritional framework.  Growing cash crops like tobacco and cotton in order to supplement missing nutritional elements is not sustainable partly because it is impossible for such measures to sustainably fill all nutritional gaps, some of which can easily be met locally.