African countries are full of human rights interventions that focus mostly on partisan political rights ignoring the rights of local people to produce their own diverse foods in ways they want.  Human rights should not just be enabling local people to access donated food. Evidence from African informal food markets show the extent to which diverse local food production systems constitute democracy, lived reality and resilience. If local communities are persuaded to shun their diverse food systems for a narrow range of hybrids, their democratic rights to produce and consume foods of their choice is undermined.  This is worsened by formal education’s obsession with hybrids at the expense of studying existing foods.  A majority of developing countries have an over-supply of agronomists and animal scientists who have studied a few exotic hybrids at the expense of a wide range of local foods on which the majority of populations have survived for generations. Democratization of local food systems is under threat. 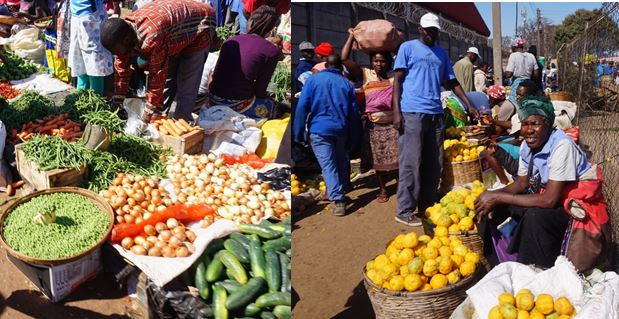 By increasing access to a wide range of food types, informal markets increase choices and diversify sources of knowledge on different foods. Unlike formal monocultural food production systems, informal markets demonstrate how local food initiatives are interdependent nodes in evolving socio-economic patterns.  Farmers, traders, transporters, consumers and other actors who frequent informal food markets always explore ways of building bonds of connection within the entire informal food ecosystem.  They go on to build networks of solidarity where farmers and traders intuitively and instinctively collaborate rather than engage in cut-throat competition. By collaborating more than they compete, farmers, traders, transporters and other value chain actors co-create shared abundance and a rich food ecosystem.

The informal market as a source of collective wisdom and democracy

An additional role of informal markets is empowering the wisdom of all value chain actors in ways that leverage rather than eliminate diversity. By focusing on a few hybrids monocultural systems oversimplify the complexity of food systems. In pursuit of such a win-lose logic, commercial agricultural practices end up presenting local food systems as vying for supremacy with hybrids. That approach reduces a community’s overall collective wisdom by excluding minority foods, insights and energies, as well as evoking resistance from those who are ignored.

Although hybrids receive most of the attention from policy makers and development agencies, informal markets give space to minority commodities and related knowledge. To the extent informal markets mobilize value chain actors to engage their full diversity in creative ways that call forth greater shared understanding, they generate more democracy and collective wisdom. As part of furthering wiser forms of democracy, informal markets creatively use diversity and common ground to discover deeper and broader life-serving possibilities.

Respecting the limitations and strengths of local people

In addition to demonstrating socio-economic resilience, minority agricultural commodities respect the limitations and strengths of local communities. In order to build a modern agriculture-driven economy, a commitment to tracking consumer tastes and preferences cannot be over-emphasized. Such efforts will lead to the evolution of different niche markets that can sustain local economies, translating to real value for money and better Return on Investment (ROI). In the absence of market evidence like volumes of diverse commodities consumed locally per given period and the kind of consumers, it is difficult to know the return on investing in different kinds of agricultural commodities.