Although rural communities in Africa may not directly push-back donor support, murmurings of dissatisfaction with some development interventions are getting louder. Such concerns are being expressed when farmers meet in markets and farming areas. Some community leaders are mastering the courage to loudly reflect on how long they will continue relying on food aid when what they really need is support to unlock value from their local natural resources like underground water, fertile soils and rich biodiversity. 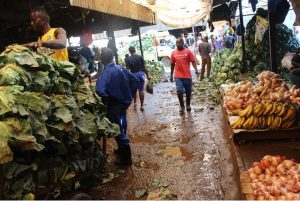 For development agencies and private companies that have been taking farmers for granted through predatory and extractive models, it seems such practices have reached their ceiling. News of farmers dumping milk and food on the streets in protest over poor prices have often come from other parts of the world like Europe and Asia. Such ways of revolting against economic injustice are slowly finding their way to Africa. Tobacco farmers in Zimbabwe have been on the receiving end of poor marketing prices for decades. This year, for the first time in decades, smallholder farmers withdrew 98% of their crop from the auction floor in protest over poor prices. A video of a widow screaming and cursing the auction system went viral. These are telling signs that change is in the air. The days of economic injustice are numbered.

While anger has been simmering for years, many poor communities are now mastering the courage to share their nasty experiences with contracting companies, financial institutions, donors, NGOs and other proponents of external socio-economic solutions. Poor communities are finding ways of questioning the reluctance by development agencies to integrate grassroots experiences and wisdom into development interventions. Rather than continue to craft development interventions from the top, communities now expect funders to tap into wisdom from farmers, traders, rural artisans and rural agro-dealers who fully understand the micro-economic situation in local contexts where they remain quiet change agents.

Just as financial institutions and development agencies use many ways to gather information about communities and individual farmers, there is now an expectation for external agencies and investors to share their full profiles for the benefit of grassroots communities. This will assist communities and local economic actors to make sense of investors flowing into Africa, some of who are fly-by-night and briefcase investors. Instead of looking at everyone from outside as an investor and give him/her all the attention and information, farmers and SMEs need a mechanism for assessing so-called ‘investors’ so that they don’t waste time on speculators and predators.

Investor profiling will address many challenges and expose scenarios where financial institutions have been very dishonest in their dealings in ways that have impoverished communities and irrigation schemes. African institutions and individuals continue to waste a lot of resources responding to calls for proposals and most of this effort is misappropriated by outsiders. Several farmers narrate stories of how they have  been persuaded to grow export crops like baby corn, gooseberry and serenade chilly, only for the so-called exporters to change goal-posts and start hiding once the commodity is ready.

When are development agencies going to stop hijacking government departments?

This is another question being debated by farmers who have seen government extension services losing their mandate to NGOs in Africa. A fresh example is the Zimbabwe Agricultural Knowledge and Innovation Services (ZAKIS), which is being driven by NGOs when it should be the mandate of the ministry of agriculture and farmer unions. In a knowledge economy and a rapidly changing climate, agricultural knowledge and innovation are becoming national security issues just like food. That is why in developed countries agricultural knowledge and innovation is a fundamental government policy issue.

Conversely, instead of empowering government departments and farmer unions to productively handle agricultural knowledge and innovation, Western funders are channeling resources to NGOs whose presence in rural communities for decades has not changed lives. Where government departments are involved in such projects, their role is merely cosmetic and meant to open and close workshops as opposed to be in the driving seat.