With Africa fast becoming the world’s centre of economic gravity due to its natural resources, it should re-define economic growth. Growth is not about building sky scrapers or turning productive land into residential areas. In addition to food production, African countries should define growth as purifying indigenous knowledge systems into excellence that can be exported to other parts of the world.  Prime land should be devoted to the production of nutritious food systems that are becoming scarce globally. 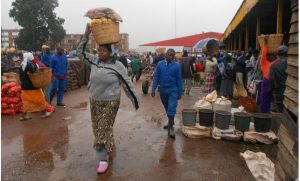 There is no doubt that Africa is going to grow food for the whole world irrespective of threats from climate change. Consequently, the bulk of African land should be a powerful economic resource for future generations. However, value and growth can only be fully unlocked if African countries invest in valuing their resources and knowledge toward becoming champions for the new global economy.

African agriculture is largely being driven by informal markets within which are found micro, small, medium and large scale actors. Since these are within the same ecosystem, there is need another layer in the form of a market that could be a spring-board for new markets like processing and export. Agricultural policies should look at succession issues within vibrant markets that are driving African economies. SMEs are in the same scenario – there are micro, small, medium and large actors mainly in terms of knowledge but their succession is constrained by lack of pathways like land and supportive policies.  While much of the land in peri-urban areas and growth points is being given to residential housing land developers, SMEs do not have land for industrial growth. Unless these issues are addressed, African countries cannot build home-grown economies and solutions.

At policy level African countries have not developed proper definitions and strategies which show graduation pathways from micro to small, then to medium and so on, with supporting infrastructure and services all the way to large scale. Doing that would lay the foundation for synergies with value chains. For instance, the micro level can be linked with communal farmers trying to process commodities at household level. The small will be clustered with a group of farmers at the subsistence and semi-commercial levels while medium will work with farmers who have wholesaling potential for feeding into bigger wholesalers.  Medium scale can focus on medium scale farmers while large enterprises can do final finishing and packaging for export. There has to be a curricular and dialogue with traders on how they can move to the next level. Knowledge within these ecosystems and markets should be carefully captured and shared in ways that prevent loss of momentum and institutional memory.

What forms of storing wealth can sustain a home-grown African economy?

Growth is also about appropriate ways in which the majority of people can store and preserve their wealth. Traditionally livestock was used as the main store of wealth in Africa and, thankfully, some communities like the Masaai in East Africa, have had the wisdom to stick with these important ways of storing wealth. In most parts of Africa, people no longer have traditional stores of wealth the way hupfumi was defined traditionally.  Globalization and modernization has incentivized Africans to use banks as a way of building wealth.  Now that the whole banking system is collapsing and pensioners cannot get their savings, things are falling apart. The use of financial systems like banks as stores of wealth makes sense in stable economies not threatened by climate change and various forms of economic down-turns.

Succession pathways followed by formal companies and institutions are tied to treating knowledge as private property. However, this has serious limitations. For instance, Africa’s banking system does not have succession pathways that support home-grown solutions. International banks do not share succession wisdom with indigenous banks. International banks function more like family trees such that Standard Chartered Bank in an African country shares more knowledge with Standard Chartered Bank UK and not with local banks.

While there is nothing wrong with formal organizations sharing knowledge internally, organizations in the same African context should co-create local solutions. African countries should package local businesses and SMEs into specific pathways anchored on indigenous knowledge systems. International corporations and financial systems are failing to work with African systems because there is so much they do not understand about local knowledge pathways and systems. In African systems, patenting of knowledge has been done through relationships built over decades and expressed through informal markets.

How ca we support these pathways in ways that create space for growth? In terms of systems, African policy makers are still fond of using colonial terms like formalization and registering a business for the purposes of paying tax. Why should money be in the fore-front?  Why not give ownership to business entrepreneurs who already know the right thing to do.  Formalization should mainly be for institutional purposes so that policy makers know where SMEs are operating from as a way of then ensuring specific standards, supporting by systems for collecting and sharing evidence. It should not just be for extracting tax.