When you visit an African city and want to see practices that portray African identity and knowledge don’t believe what you see in hotels, colleges, formal schools or government departments. Your most important eye-opening destination is the informal mass market preferred by the majority. Besides farming communities and forests, informal markets are some of the most important sites and situations where indigenous knowledge systems reveal African-oriented values and realities. Most of these aspects are embedded in identity expressed through practices and real life problem solving not just traditional dance. 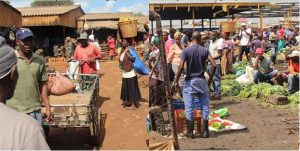 Indigenous knowledge has existed in Africa’s rural areas and practices for generations. Over time, such knowledge has found its own pathways into other neighboring communities through local trade and socio-economic practices, among other ecosystems. Communities had realized that they would not grow if they remained closed from the outside world. As they started opening up they began exchanging knowledge and enriching their identity and values.

Food systems shared through informal agriculture markets have been a critical avenue in knowledge exchange between communities. Through local languages used in African markets, communities which did not use to produce and consume yams have become avid consumers of this food. Related knowledge has not been documented into recipe books but simply shared through verbal explanations of how yams are grown, cooked and consumed. Such knowledge has not been locked into strict manuals but has remained fluid to provide room for other options like processing yams and consuming with other locally available foods, depending on context.

Compared to formal institutions like universities and private companies where knowledge is considered private property, informal mass markets are public institutions where knowledge is a public good. Those who benefit from the knowledge are expected to contribute new knowledge to the institution and there are consequences for privatizing public knowledge. This is typical of African society where knowledge is shared openly as part of daily life. Informal mass markets also have unique ways of targeting knowledge according to age, gender and other roles and responsibilities. While men are seen lifting heavy loads like bags of potatoes and cucumber, women are seen creating food baskets comprising carrots, butternuts, peas, pepper and other ingredients. Women’s dress codes like aprons and hats also speak to their roles.

Knowledge travels within commodities and people

In the informal market you can also easily tell the identity of crops or food. For instance, while imported fruits can come in certain labelled packaging, local food is often identified by its raw state sometimes coming into the with soil particles from production areas, for instance, potatoes from Nyanga district.  Measurements used in the market also communicate contexts and identity. Indigenous measurements include wooden boxes, buckets, tins, baskets and cups, among others.

African informal markets bring together different ages and gender. By looking at participants you can easily estimate the ratios of men, women and youth. That tells you the proportions of local people, for instance Zimbabweans generating their own solutions and creating their own employment in Mbare market. If the market comprises more than 90% local people, it means purely indigenous knowledge is being used to generate home-grown solutions. On the other hand, in UN agencies where local staff can comprise 65% it means 35% of the knowledge is not indigenous and may not produce local solutions.

The market as an open learning institution

As an open learning institution you do not have to pay tuition fee or entrance fee to start learning in the informal market. The consensus in these markets is that knowledge is about sharing. On the other hand, imported knowledge acquired through formal institutions is about memorization before going to the next stage. If you miss the next step the knowledge and users become redundant. Knowledge is locked in a chain unlike indigenous knowledge systems which respond to different pathways, contexts, users and demographics.

In informal markets, there is a specific way you speak to a granny or in-laws. Yet in academic circles, relationships are based on first name basis where old professors can be called by their first names – John, Peter, Hazel and many others. In the market you don’t hear a married women called by her first name. She is either addressed as Mai Tawanda (Mother of Tawanda) or using her totem like Chihera. Men are mostly addressed through their totems – Moyo, Humba, Mhofu and so on. This is a powerful way of recognizing identities.  Greetings are not just good morning but “how is your family at home?”

The learning is not closed like where one needs qualifications in order to participate (5 Ordinary levels plus English and Mathematics or Science) in knowledge sharing platforms. It is about passion – you observe, learn, participate and grow in the ecosystem and graduate from one value chain to the other. Your failure is through experience not examinations. For instance, one day you experience losses due to over-stocking or under-stocking. Within three to five years you have mastered the business – you know where to get what, how to negotiate, build trust and relationships that build these markets holistically so that they continue functioning based on relationships built over years.

Language as media of communication

Whereas imported languages like English, French and Portuguese have been imposed as media of exchange in formal institutions like African government departments, private companies and universities, more than five indigenous languages can be spoken in one informal market. All these languages communicate an African identity.  Unless you are good at picking different accents, when you see a black person speaking in English or French in a development organization, you cannot tell if that person is from Ghana, Ivory Coast, Guinea, Namibia, Malawi or Zimbabwe. This is how imported knowledge and associated languages have interfered with African identities.

Due to the resilience of African informal markets, indigenous knowledge is now growing backwards from urban markets like Mbare back to rural markets at growth points and road side markets.  That way knowledge is becoming more context-specific.  For instance in Zimbabwe, traders from Binga, Masvingo and other districts are going back to embed knowledge acquired from Mbare and that means food systems from other areas are being anchored on local markets.  That is why you can find butternut and pine apples in Gokwe where they are not grown, thanks to the local market which has become a scaffold for what is coming from outside.

On the other hand, academic knowledge cannot go back to assist communities. The more you go up, the more detached from local reality. If you come from Mutambara and go to study robotics, there are no pathways for you to come back and use that knowledge to uplift your local community in the event of a cyclone striking.  You can only donate some goods but cannot apply your acquired knowledge.

The way African countries define literacy is still based on imported knowledge which does not take into account emerging knowledge that people use daily. Imported knowledge is based on case studies but no one has ever succeeded in generating solutions through case studies. African countries should seriously consider re-defining and broadening the definition of literacy to include indigenous knowledge aspects like culture, identity and values.  It doesn’t matter how much imported knowledge you have absorbed, if you are ignorant of your culture, identity and values you are illiterate.

This is not to minimize the significance specialized knowledge

eMKambo is not suggesting that African countries can solve all their challenges using indigenous knowledge systems. There are many knowledge themes where Africa is still lagging behind and certainly need imported knowledge. For instance, knowledge for treating certain human diseases can be legitimately imported through medical experts and specialized medical equipment. In addition, since Africa has not participated in generating imported knowledge, experts who repair air crafts and dialysis machines are still coming from outside because certain levels of knowledge require going back to the source.

However, where Africans participate fully like in agriculture all the way from production to marketing, they should be able to generate solutions without resorting to imported knowledge. For instance, through informal markets, Africans can be able to rationalize few supplies, adjust market demands and reducing market outreach. There is no need to import knowledge for let development organizations direct such decisions.